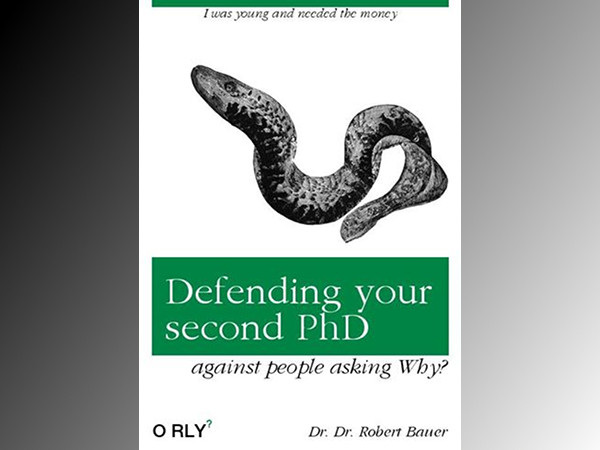 Last week i had the viva for my Dr.rer.nat. To be specific, it was a sunny afternoon on a tuesday, the 28th of march 2017. We drew a small crowd. Not only did i defend in front of four professors. It was also a public event, and because my colleague and friend defended prior to me, we had a lot of guests in the lab.

This was my second viva. The first one took place almost five years earlier. I defended my Dr.rer.soc, and if i remember correctly, it was also a sunny afternoon. Don’t pin me down on it. It was a thursday, the third of may 2012. What was very different was that i delivered in the office of one of the two professors. They were the only audience.

My first thesis was a monograph. I ended up submitting roughly 230 pages. I was writing almost everyday over the course of 3-4 years. And this poor sap here used MS Word.  It was a nightmare. I got the book published with a renowned publisher, as suggested by my supervisor at that time. This took some weeks for editing and proof-reading. They charged quite a lot for printing 150 copies. I believe almost 3000 EUR. But most of it was luckily covered by my graduate school at that time. The 600 EUR that weren’t, i got back via VG-Wort. Actually, i believe i made a little bit of profit on the book.

The second thesis was cumulative. I had to write 15 pages cover text. Writing took me one day, plus one day proof-reading and layout. The rest was just a facsimile of five already published journal papers. I had to pay 40 EUR to get 5 copies printed and bound at a local copy-shop. Consider, that the APC for the papers was covered by the lab, when necessary. Granted, the process of submission papers and getting peer-review and re-submission also has its emotional cost. But i gladly take a thousand peer-reviews and re-submission instead of having to write again a 200 pages scientific text with functions, and figures and tables in MS Word.  Would Latex have been a better choice? Can’t really tell. Having now some experience in both, I’d say yes. But so far i never wrote so many pages in Latex.

I got a three-year stipend for the first Phd. The grad-school payed ~1400 EUR, but i had to pay my own health insurance, taking it down to ~1250 EUR. With the added “benefit” of not having any unemployment insurance or pension fund payments. A DFG-stipend sounds delicious. But financially, the monthly payment is insufficient.Yet, being member of  a grad-school, i had office-space, was allowed to order all books i wanted, and travel costs were covered freely. I was probably at 6-8 conferences or summer-schools per year. Two colleagues of mine at that time got a semester at a Ivy leage university payed by the grad-school. Additionally, i was enrolled in kind of a second grad-school (ESADD), which was essentially six weeks of course-work on addiction research. In that regard, pay was low, but infrastructure was great.

For my second PhD, short of the two first months, during which i had a stipend (again ~1400 EUR), i had a full-time contract as a PostDoc in the lab of my supervisor.  With pension, unemployment, health insurance and tariffs negotiated by a very strong union. Payment was and is therefore more than sufficient. Yet, and probably this is because i am working as a PostDoc, i feel the brunt of academia much more. The requirement to publish in “high-ranking journal” to get funds is way more evident.  This being a contract, i also have a superior, who could order me around (in reasonable limits). Certainly, within science, conflicts are usually decided following a rational discussion (this is really my experience!), but the general strategy and important decisions are under control of the PI. And to be honest, i would not like to have it different, if i were the PI.

This links to the next point. The real advantage of running on a stipend, and having a very good infrastructure as during  my first PhD, was the total freedom i had to perform exactly that kind of research I wanted.  I came to Tübingen, and knew nobody. I had no supervisor for the first two years. Only during the last year, i started to reach out to professors.  Finally I settled  on two (or they had pity - who knows) and  they graded my thesis and listend to my defense. There were more than 18 PhD-students enrolled in the grad-school, and i had i think another dozen colleagues in the other grad-school. We regularly gave talks in front of each other on the status of our theses. Due to this good infrastructure, I felt that i had sufficient feedback. I guess at that time i was arrogant enough to believe that this is enough.

During my second PhD, i started first with finishing own individual projects. Then, we collaborated closer in a small teams. After a while, i designed the study and coded the protocol, while students took the measurements. All of this under close supervision with the PI.  Finally, I ended up doing almost no measurements anymore. My day now consists of coding for analysis or measurements, writing manuscripts, supporting grant applications, consulting PhD-students and supervising bachelor or master students. Add some administration. Do i prefer working under a contract? Well, it gives a sense of stability and financial freedom. I also get a more direct experience of the life in academia a PI would endure. And the freedom i had as a novice, single PhD student will never return.

I guess you can not really use my story as a comparison of getting a PhD in neuroscience versus in social science. Not only was i enrolled in an interdisciplinary grad school, i also did my second PhD while already working as a PostDoc. This means my perspective is pretty weird!

I am glad that nobody ever asked, which science i prefer, or which title i would choose, if i had too. I could not tell. I love the analytical and rational part of philosophy, and the software engineering part for neuroscientific research.

But most importantly, I do not feel proud for my titles. For me, the years spent for each thesis are like chapters of a book, and the titles are just two dog-ears.

Currently, no need for a third.